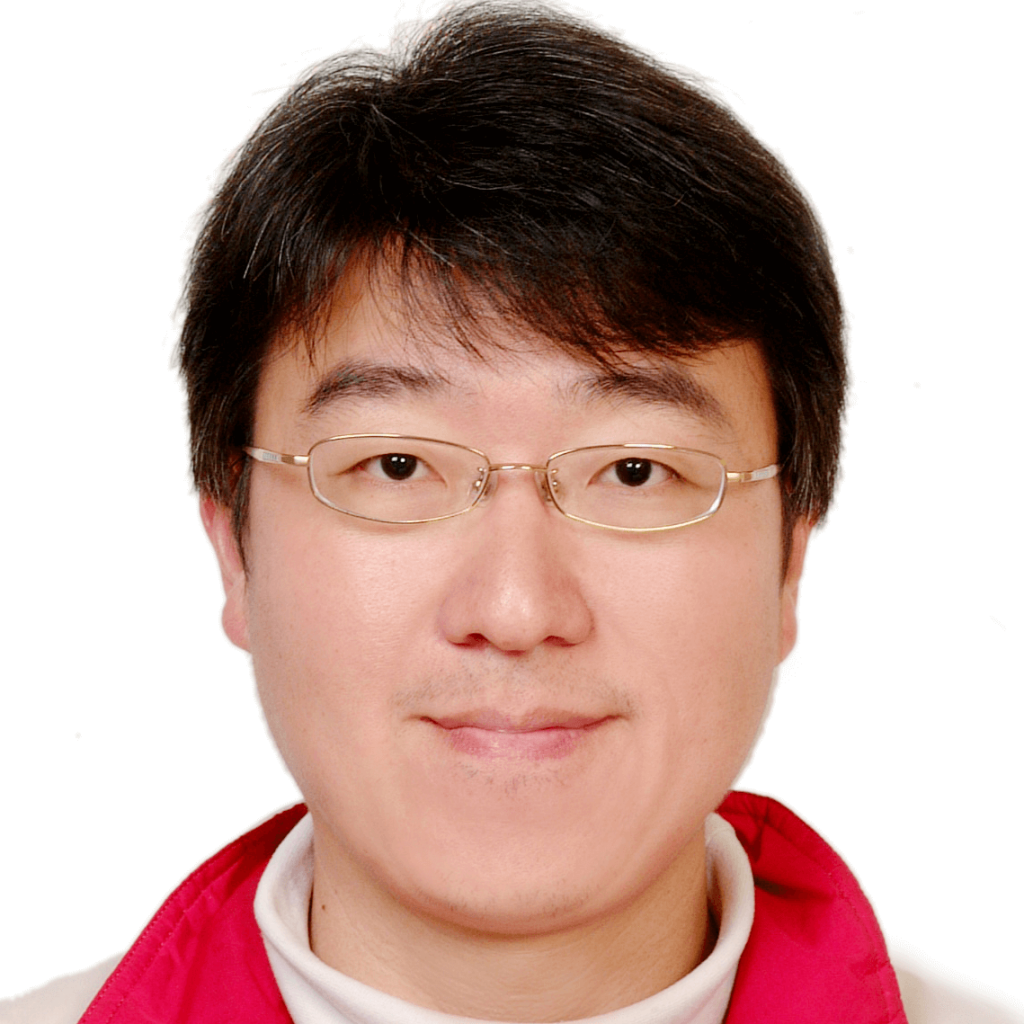 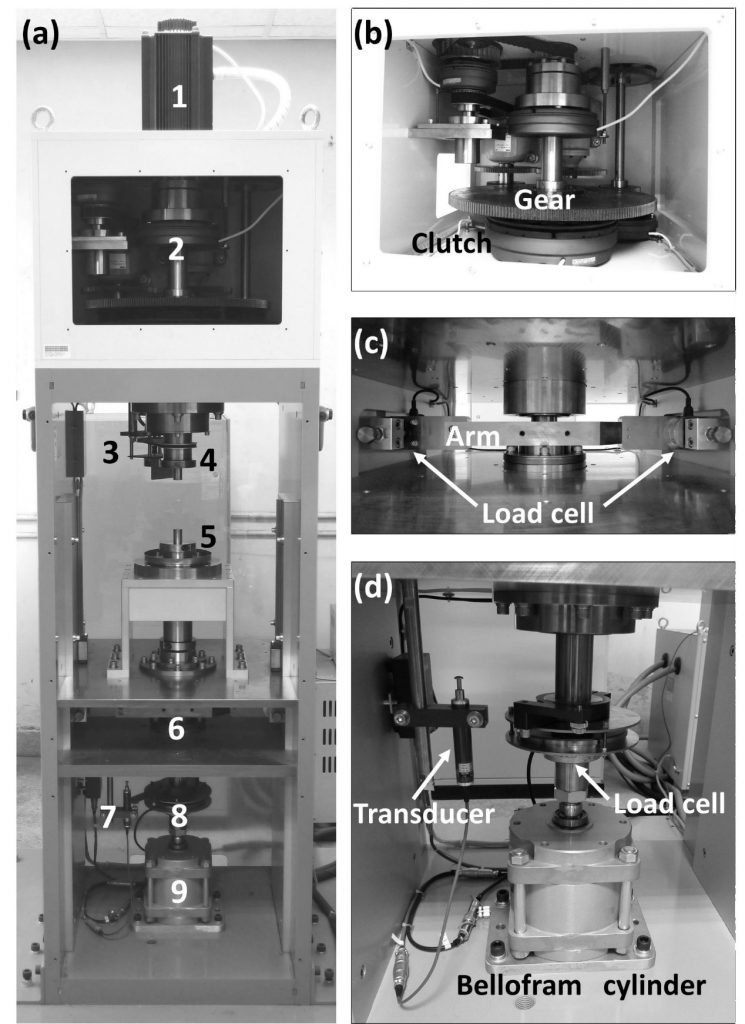 The apparatus is capable of producing slip rates of 30 mm/yr to 1.3 m/s for hollow cylindrical specimens of 25 mm in diameter and at normal stresses to 20 MPa. The apparatus consists of a 7.5 kW servomotor (1 in (a)), gear/belt system for low, intermediate, and fast ranges of velocity (2), a rotary encoder and potentiometer for monitoring the rotary motion (3), the upper rotary piston (4), the lower stationary piston (5), a cantilever-type torque gauge (6), an axial displacement transducer (7), an axial force gauge (8), and an air actuator (Fujikura Composites, Bellofram Cylinder) for applying an axial load to up to 10 kN (9). Belts, gears, two gear boxes, and five electromagnetic clutches constitute the gear/belt system (shown in (b)) to achieve slip rates as large as almost 9 orders of magnitude, by changing motor speed (1~1,500 rpm) and/or gear/belt lines. Five electromagnetic clutches allow 103 or 106 times velocity jumps by changing gear/belt lines without stopping the motor. Torque is measured by a cantilever-type force gauge with an arm and two force gauges at both ends (shown in (c)). An axial load to apply a normal stress to the sliding surfaces can be kept nearly constant, even if specimen shortens, by controlling the air pressure in the Bellofram cylinder (shown in (d)) with a regulator. Axial force and axial displacements are measured with strain-gauge based force gauge and displacement transducer, respectively (shown in (a)).

Precise knowledge of the fluid flow parameters (such as permeability, porosity, hydraulic and mechanical apertures…) of rock mass (rock matrix and fractures) is crucial for modeling fluid percolation in the crust. The YOKO 2 system was utilized to measure the permeability and pore volume of rocks employing helium as gas flow. Confining pressure can be increased up to 200MPa. 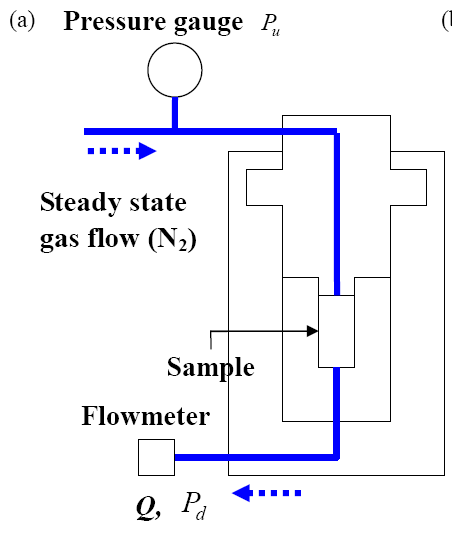 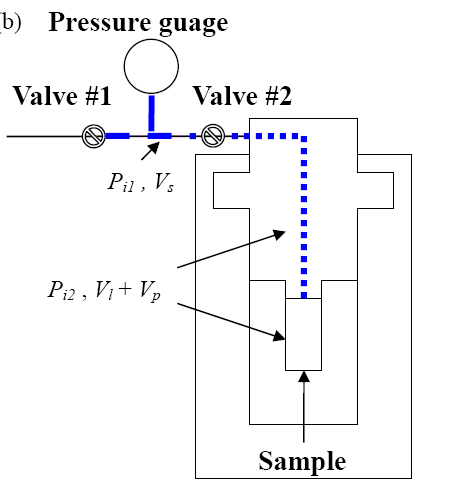 Achievements Part I: Measurement of permeability and porosity of clastic sedimentary rocks under high confining pressure.

The deep drilling project (Taiwan Chelungpu fault Drilling Project, TCDP) conducted in the Western Foothills of Taiwan, which is known to be a classic fold-and-thrust belt, provide an excellent chance to explore the stress history-dependent characteristics of fluid flow properties of sedimentary rocks. 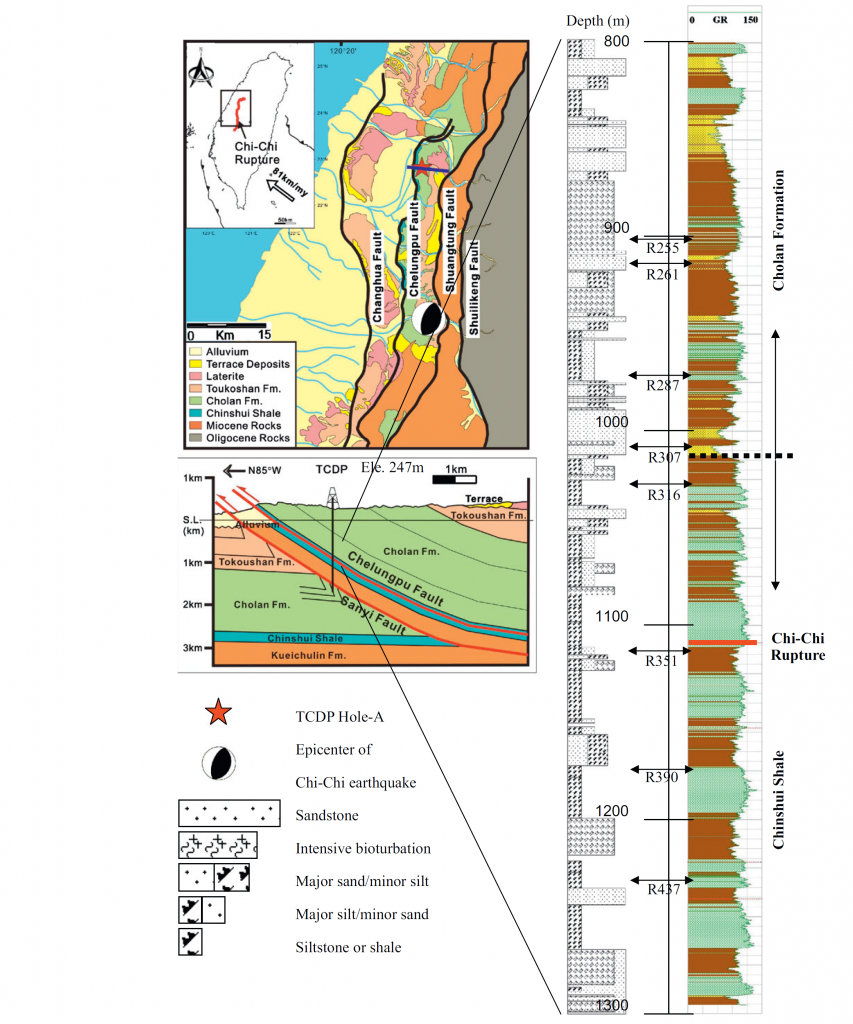 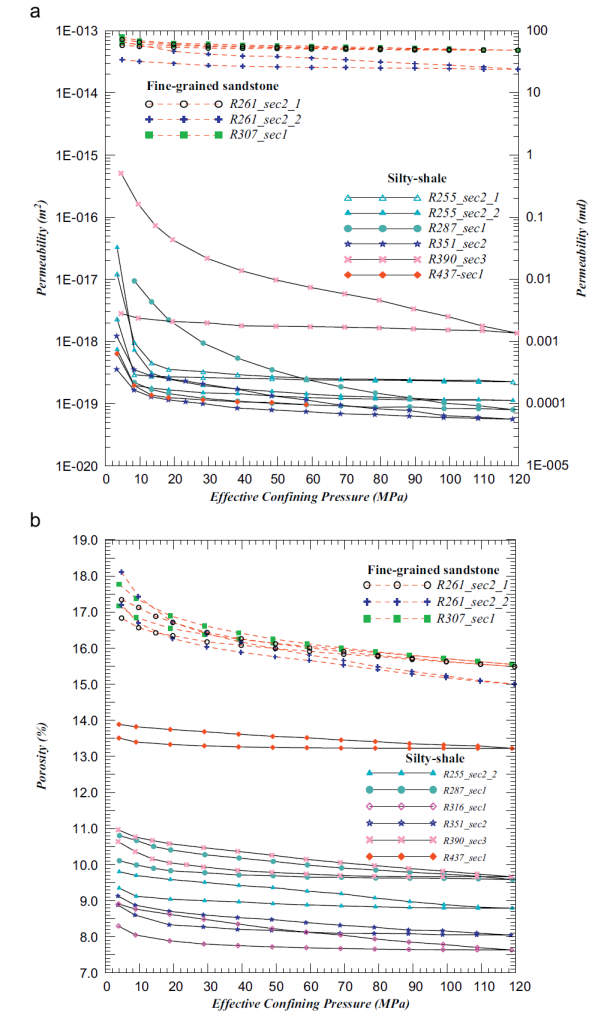 Left: Location of the Dakeng well (Hole-A, elevation at 247 m); generalized geological map and interpreted structural profile across the Dakeng well. The lithology between 800 and 1300 m below the ground surface of Hole-A, determined from the core and the Gamma-ray log, is summarized, and locations of selected rock samples are marked. In the gamma ray-derived lithology, green, brown, and yellow represent shale, siltstone, and sandstone, respectively. Right: Stress dependent (a) permeability and (b) porosity of the sandstone and silty-shale, for sandstone (red dashed lines) and silty-shale (solid black lines).

The permeability of shale was more sensitive to changes in effective confining pressure than the sandstone, particularly at low effective confining pressures. Meanwhile, the stress sensitivity of porosity of different rock types (sandstone versus shale) was almost identical. Based on the experimental results, it can be inferred that the evolution of compaction and permeability of the tested sandstone is related to the relative movement of the grains; the particle crushing mechanism is not involved. It is also postulated that a microcrack network in the tested shales contributes to the stress sensitivity of permeability under low effective confining pressure. The laboratory work indicates that a power law is superior to an exponential relationship for describing the stress dependency of permeability and porosity of the tested sedimentary rocks. In permeability–porosity relationships, the porosity sensitivity exponent determined for the sandstones is close to the theoretical values calculated for porous mediums (3–5). In contrast, the porosity sensitivity exponent of the silty-shale is much higher than that of the sandstone.

Exponential law for permeability and porosity

Power law for permeability and porosity 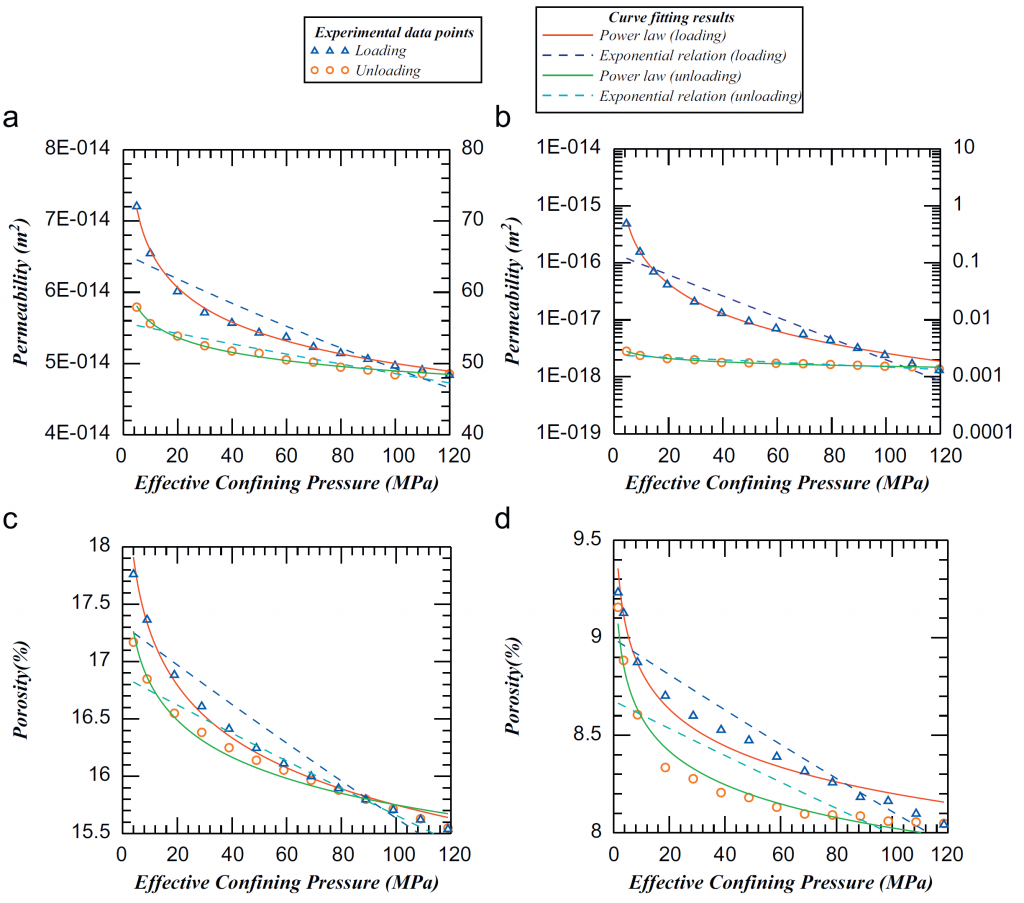 Based on the proposed model of stress-dependent porosity (Dong et al., 2010), new technologies for evaluating thrusting/erosion of the sedimentary rocks and predicting the porosity-depth relation are proposed (Wu and Dong, 2012). The results shown the maximum effective stresses of the rocks below the Sanyi Fault (reverse fault) are close to the in-situ vertical effective stress. Above the Sanyi Fault (hanging wall), where the rocks have been thrusted, the maximum effective stresses of the rocks are significantly greater than the in-situ stress. It is inferred that the total displacements along the thrust Sanyi Fault is 11.5 km, a value close to that determined from the geological profile (14-16 km). These results indicate that the proposed laboratory-based method is potentially useful for determining the thrusting and erosion in a fold-thrust belt and the total displacements along a thrust fault. 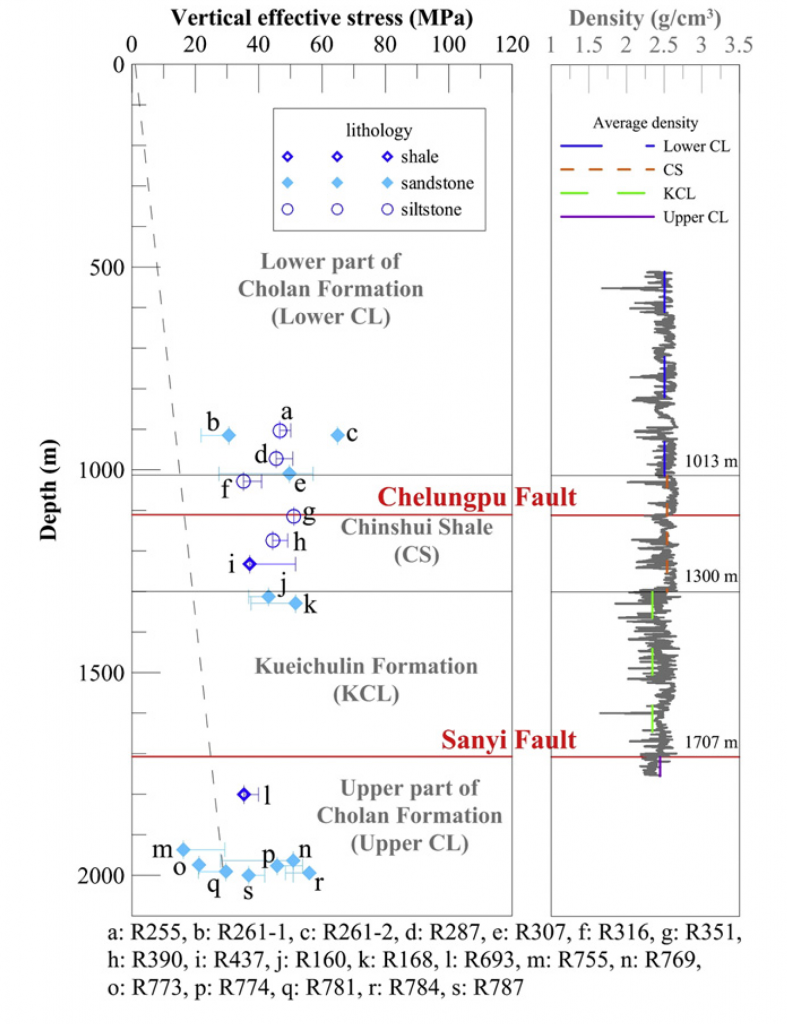